I purchased a book for my Grandson entitled "Living Fossils" Evolution: the Grand Experiment. I had intended to take a quick look at it before I gave it to him, but I couldn't put it down, it was fascinating. I started to look at fossils on the web and couldn't believe how many different animals and plants there are in the fossil record. I was astonished to find so many of the species are still alive today. Around this time I saw a demonstration by an artist painting fossils but not as they are, he made them look like metal objects. Quite different. However as I sat watching him I felt inspired to paint fossils that really look like fossils and from my research I would incorporate animals that are living today. I had taken photographs of a Red Headed Agama Lizard on a recent safari in Tanzania, so this was going to be my first attempt.

I loved the challenge, a completely different media to that which I normally use. In fact in this first picture I found ninety nine ways of how not to use Acrylic paint. Oil is so different to use. Some time earlier I had met John MacKay the International director of Creation Research Australia, at a conference in Bournemouth. As I had no reference for a lizard fossil I emailed asking if he had any reference he would allow me to use. After an email chat I decided to just use my lizard but make him look like a fossil. John said he would like to see the finished piece.

Upon completion I sent him a photo of the painting. 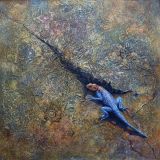 Early in 2012 John asked if I would like to paint a Mural for his site in Australia, in the same genre "Living Fossils". I did point out this had been my first attempt, but he was very encouraging. It took me ten weeks to complete with lots of challenges, the first problem arose in the method I was using. How was I going to paint the size he wanted and then get it to Australia? I decided to make it in six panels all the same size. So that a computer technician could scan the images and stitch them together to make the mural.

I spent the first week planning, re planning and collecting my reference material. Luckily some of the things were growing in my garden, the fern, snowball bush, fir tree and cones. I also had a small ammonite and a frog which I had found dried up in my garden.
Other reference material John provided for me, such as a Wollimi tree for instance, I had not heard of
Once I had everything to hand I spent ages drawing, then re drawing and scaling it all up, photographing bits and sticking them on a large sheet of paper.
I found that some things worked in the mural but when I split it into sections it didn't work. I wanted each panel to work separately and as a whole. This was by far the most difficult part of the whole Mural.

Eventually I had the composition sorted and I was ready to draw it out on my panels. This was the easy bit as I had done lots of preliminary work.
My next and continuing problem, I had to keep painting all the panels at the same time, so as to I keep the colour continuous throughout. My easel isn't big enough for more than two panels at one time. I would work on two panels until ready for the next one , then take one off the easel on one side and add the next piece on the other side, and so on. I was also using Acrylic paint which dries so quickly if you leave your brush with paint on to answer the door, the brush would be solid when you came back. I tried using a retarder which is supposed to slow down the drying time but unfortunately I was working on this painting in the few weeks we had hot weather, so it didn't really work.

Finally it was finished and I have to admit, I really enjoyed the whole experience. Particularly solving the problems I encountered on my journey.

Thanks to doing something completely different in technique and medium, I look forward to undertaking a much wider range of subjects in the future. And I thank God for the challenge and the results

Subsequently in 2013 I painted a second mural in three sections. showing animals of the sea, all found in the fossil record today . This was photographed and sent to Australia to make the mural. 2014 I entered the triptych into the David Shepherd Wildlife Artist of The Year at the Mall Galleries London. I was thrilled and delighted when it was shortlisted then awarded Highly Commended. 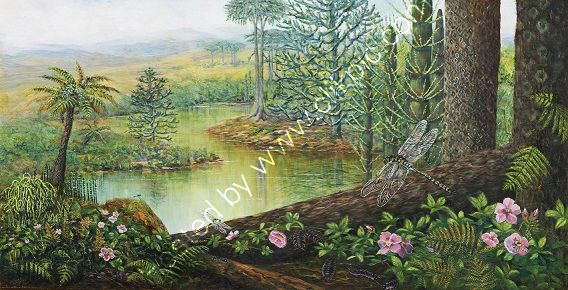 2016 I painted this mural showing trees as they were and the same trees today much smaller. The mural also contains insects and dragonflies showing the same size comparison

2017 I painted a Mural showing dinosaurs drowning and the Fossils being found today. The Fossil of the Tyrannosaurus Rex shows the arched neck of a sudden death drowning.. 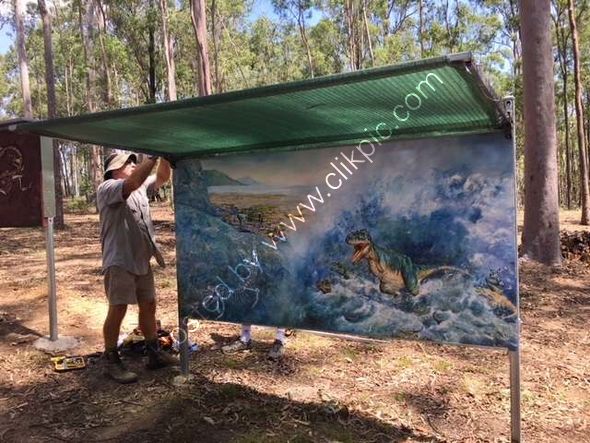 My latest mural being erected in Australia.


The Living Fossil Murals are displayed at The Creation Research, Jurassic Ark project, Australia
Next
Previous